Welcome to the Reschen Valley

Have you ever been to the northern province of Italy called the Alto Adige / South Tyrol? Come with me. I have something to show you… 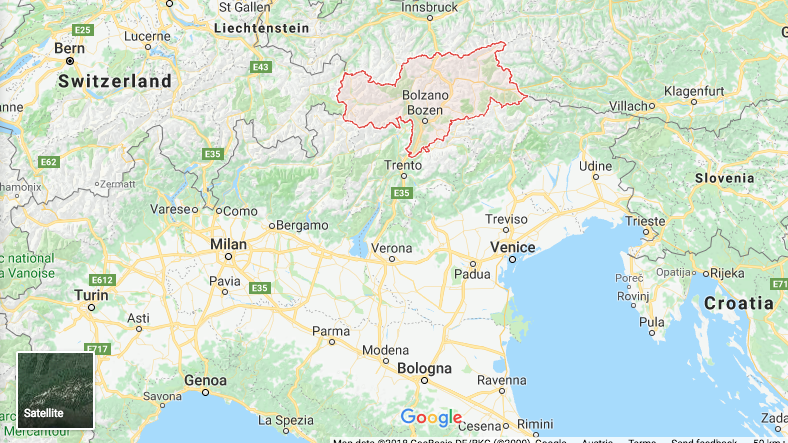 Imagine driving south over an alpine pass, crossing from Austria into Italy. You might expect Italian restaurants, Italian signs, and Italian architecture. But that’s not what happens. It still looks like the Austrian Tyrol with a few Italian names but the German language is very present.

Keep driving, because here it comes: spread out before you, an unbelievably beautiful reservoir nestled into the horizon and spanning some 4 miles. The sight of that aquamarine water takes your breath away. You pass the first town and quickly come upon the next one called Graun / Curon Venosta. And then there it is. Off to the right, some 50 feet from the lakeshore, is a fully intact medieval church tower rising straight out of the water. This is the setting of the Reschen Valley series.

That haunting sight! I saw it for the first time in 2000 and I wanted to know what had happened. However, language barriers presented problems. I passed that disturbing scene each year during which pieces of the story fell into place. My German was getting better. I was directed to a museum located above the fire department. I discovered what devastation and destruction lay below the surface of the water. The more I learned, the more I wanted to get to the bottom of this story. I found information about the secret Treaty of London, signed by Italy in 1915 as negotiated with them by France, England, and Russia. I researched Woodrow Wilson’s 14 points, then his biography. I read a Hungarian Ambassador’s book from 1964. I found a professor in Innsbruck whose work had been translated into English. Most surprising, I found that a lot of people in Austria and Italy knew little about the details of South Tyrol’s annexation to Italy!

More so, the deeper I went, the more mysterious and thrilling the story was becoming, especially in regard to how the reservoir was built. I was making two or three trips a year, spending a lot of time in the province and getting to know two cultures: the Austrian Tyrolean one and the northern Italian one.

By the time I visited the Reschen Lake reservoir for the tenth time, a whole slew of characters had risen above its surface: a young farmer woman, a sassy innkeeper, an Italian engineer, a German carpenter, a dog. A Fascist colonel. They clambered into my Nissan Micra and never let go.

Here’s how the story begins:

It’s 1920. The Great War is over but a new conflict has begun. Katharina Thaler, a Tyrolean farmer, is out hunting when she discovers an Italian veteran who’s been stabbed on her mountain. Terrified that one of her own people has committed the crime, she must choose to save him or leave him to die. Her decision thrusts her into a labyrinth of corruption, greed, and prejudice as Katharina is caught between the Tyroleans who are trying to stop the annexation to Italy and the growing Fascist powers that need their land to produce electricity; electricity required to prepare for the next war.

My journey in writing what will be five novels spanning 35 years, required steering around many a conundrum. First, how far beneath the strata of my two cultures must I go before I can feel confident about creating a semi-fictitious world and still do the cultures justice? I could never presume to know or understand enough than that which lays beneath the first few layers. I will always be an outsider writing from an outsider’s perspective. And I feel that has its advantages.

Further, I’m writing the books in English with characters who would normally speak German and/or Italian. It’s thrilling to have this much fodder for conflict: cultural clashes, misunderstandings, plays on words. I am also, however, acutely and painfully aware that my ability to play on those in depth are limited if my audience is an English-speaking or English-reading audience. This has caused me to experiment for years in creating a world that is universally understandable. The trick was to have enough of both cultural aspects and unique language that, should these novels ever be translated into German or Italian, they would not feel watered down to the native population.

And then there was the question of taking sides in the conflict. I made the decision to explore all aspects of this story, all its arguments, and objectives. It is not my job to illustrate who is right and who is wrong in this conflict and I don’t think it’s realistic anyhow. Once again, I made conscious decisions to create three-dimensional characters with all their flaws and strengths, with all their motivations to do good or evil. I did not want to make this conflict my conflict.

In the end, I set out to write a gripping story with characters readers can engage with. While uncovering one of the least known histories in western Europe, I also discovered that there is a warning in those pages that we, today, must also heed.

Let me know what you think! I really enjoy getting to know my readers! Don’t be shy! And if you have read any of my work, please do leave a review on the platform where you purchased the book and on Goodreads. We writers really count on your support and feedback! If you’re not sure how to go about writing a review, you can check out my tips!

As a thank you, you will receive
From Jutta's Kitchen
12 South Tyrolean recipes to bring
the “Reschen Valley” closer to home

Why I write historical fiction