Glossary for the Reschen Valley Series 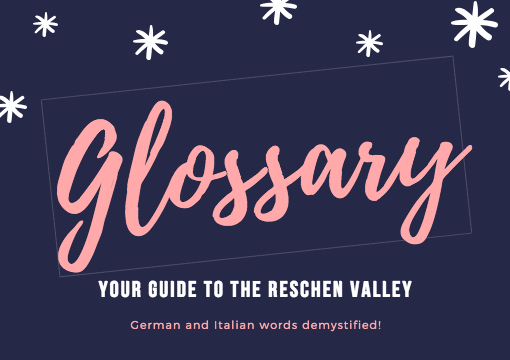 Here’s a list, in alphabetical order, of the foreign words most commonly used in the series (links to Google images included for most):

Apfelstrudel/Strudel is a strudel, sweet pastry

Bauernschlau this refers to a type of intelligence that might be unexpected from an “uneducated” folk. When someone refers to this “farmer’s cleverness”, it is usually in reference to a brilliant and unexpected idea, or prank, or joke. Kind of like “playing dumb” and getting the best out of something.

Braunvieh the typical cattle breed in the area

fidanzata girlfriend, the catcalls Annamarie hears from Italian men in her valley

Fräulein out of date today, but Miss

Gipfel pastry shaped like a croissant but not as flaky, usually more like a sweet bread, can be filled with a hazelnut paste

Hof refers to a farm or homestead, similiar to an American ranch

Podestà the prefect or magistrate

Senner the dairy man, the person in charge of processing the milk from cows for butter, yoghurt and cheese, usually hired on at the pastures / alps during the summers

Signorina out of date today, but Miss

Sommerfrischler a slang term for vacationers, literally meaning someone who is out to take in the fresh summer air

Speck smoked side of pork, bacon (very special to the region and as unique as Canadian bacon is to Canada).

Stube in a home is like a parlour, but it’s not. There is usually a tiled oven, table and chairs, and sometimes a single bed near the tiled oven or something else to lounge on. It was used as the multi-functional gathering room in every house.

Stube in a guesthouse was usually the dining area, also containing the main heating source of the house, the tiled oven.

Tracht traditional dress, man or woman but can sometimes refer to only the man’s suit

Vorsäß literal meaning, “before the pasture”. There are three stages when taking livestock up to the alpine pastures. Before the snow melts at the very top, farmers took their animals to the Vorsäß to lower pastures, then to the higher fields, then back down to the lower pastures before bringing them home to the valley for the winter.

If you have any additions you would like me to add, let me know! inktreks@cec-world.at

Maps for the Reschen Valley Series