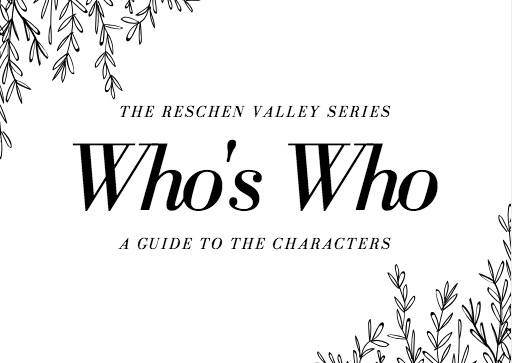 Katharina Thaler: Opa’s granddaughter, the last remaining relative of the Thaler family, in Book 1, she wants to inherit the farm; in Book 2, she wants to be taken seriously and keep her husband from leaving Tyrol, in Book 3, she fights to protect her daughter’s identity. In Book 4…well, you shall see. Father: Johannes Thaler and Marianna Thaler, both deceased.
Hund: Katharina’s loyal dog
Opa (Johannes Thaler): Katharina’s grandfather, wife has passed (Oma), and his three sons: Johannes (Johi, also Jutta’s love of her life), Josef (Katharina’s father), and Jonas.
The Ritsch Family: Kaspar, son Toni, Toni’s wife Patricia, their son, Andreas. The Thalers’ immediate neighbors.
Hans Glockner: sheep farmer, Thalers’ neighbors. His twin brother, Hugo, was killed in the Great War.
Florian Steinhauser: travelling carpenter/journeyman from Nuremberg, with ties to Tyrol (over his mother). Marries Katharina Thaler.
Katharina’s and Florian’s children (Book 3): Annamarie (whose father is Angelo Grimani), Bernd and Manuel.
Karl Spinner: not officially from Arlund (would be from Spinn). The appointed hunter for the area.

The Townships of Graun and Reschen and their surrounding hamlets

Jutta Hanny: the innkeeper of the Post Inn in Graun. Katharina’s surrogate mother. The love of her life was Johi Thaler, Katharina’s deceased uncle.
Alois Hanny: Jutta’s son, who was born with Down’s syndrome, referred to–in that era–as a mongoloid.
Fritz Hanny: Jutta’s husband who disappeared and abandoned her. The Post Inn is officially his. (The Smuggler of Reschen Pass, the prequel to the series, follows Fritz Hanny’s personal descent into hell.)
Lisl Roeschen: Jutta’s sister-in-law by marriage. Lisl is Fritz Hanny’s sister. Husband is Georg Roeschen.
Georg Roeschen: former long-time mayor of Graun.
Roeschen children: Henri (eventually works in Jutta’s inn) and David Roeschen (works with the Thalers on the alp during summer).
Dr Frederick Hanny: Fritz Hanny’s brother. Lives in the “Schlößl” in Reschen (little castle).
Sara: Jutta’s assistant
Widow Winkler: killed her abusive husband by poisoning him, lives in Jutta’s inn.
Father Wilhelm: the valley’s resident priest, main parish is St. Katharina’s in Graun and St. Anna’s chapel.
The Prieths: bakers and Jutta’s neighbors.
The Blechs, later taking on the Italian surname Foglio: the butcher and his wife, with their son, Sebastiano. Frau Blech is the teacher at the school.
Martin Noggler and his son Thomas: the local blacksmith and his son.
The Planggers: a family that lives in the nearby hamlet.
Captain Rioba and later Podestà Rioba: the appointed police chief and later appointed magistrate. We never see it happen, but we can suspect that the Colonel had something to do with the promotion.
Ghirardelli: carabinieri, military police officer
Vincenzo: carabinieri, military police officer
Anton Federspiel later surname changed to the Italian Giancomo: bank manager of the Farmer’s Bank.
Iris Bianchi, later Iris Hanny: Italian-appointed teacher and Katharina’s friend, marries Dr Hanny.
Enrico / Eric: Italian-appointed postmaster (position taken away from Jutta).
Am I missing anyone? Email me!

will be updated upon the release of Book 4 in 2021

Glossary for the Reschen Valley Series