The NaPolA: Gateway for the Nazi Elites

Extracts Historical Background Features
In 1942, Friedrich Weimer's (Max Riemelt) boxing skills earned him an appointment to a National Political Academy (NaPolA), a high school that served as an entry to the Nazi elite. Friedrich, who sees the school as his ticket to university and a better life, forges his father's signature on the permission form and leaves during the night. He makes his way to the town of Allenstein, where the school is located. Friedrich's forged papers are overlooked when he arrives. Friedrich is unaware of the true purpose of the school and is greatly impressed in his first day at Allenstein.
. This was the story of many young German youth who saw the NaPolA as a way of advancing in the Nazi German society. The excerpt above was taken from a description of a movie called “Before the Fall – Napola” produced in 2004.
View Trailer on YouTube

National Political Training Institutes were one of three new types of school/colleges introduced into Nazi Germany along with Adolf Hitler Schools and Order Castles, to teach the next generation of elite leaders in Germany – be they political or military. They attempted to recreate the type of education that the old Prussian academies had done in bygone years; a recognition by Hitler that Prussia as a state had set itself apart from the rest of Germany. He believed that what underpinned such state power was the education system that deliberately targeted the creation of an elite who would operate at the peak of government administration and military leadership.

The Nazis based their future on convincing the youth to embrace the Führer’s philosophy and vision for Germany. The pupils attending these schools were meant to become the future leadership of Germany—political, administrative, and military. The goal of the schools was to train future leaders, and especially given the influence of the SS, it was hoped that graduates would choose a career in the SS or police. Their aim was to indoctrinate young people into the ideologies of the Nazi Party.

The Napolas were for young people aged 14 to 18 years old and were gender-segregated. Selection for admission to the schools was rigorous; pupils were chosen for their political dedication and physical fitness, as opposed to their academic prowess. Boys who went to such schools usually came from three backgrounds: families of loyal Nazi Party members, families of army officers or boys who were recognized as doing very well in the Hitler’s Youth movement.

Admission to a Napola was based chiefly on the presentation of a medical certificate attesting to the applicant’s outstanding “racial” and physical characteristics. Additionally, prospective students had to show exceptional courage and aggressiveness in athletic competitions. Above-average intelligence was also required, so that those looking to be admitted had to complete 8-day entrance exams. Only boys and girls considered to be racially flawless were admitted to boarding schools.

Activities focused on political indoctrination rather than academic studies. Due to the highly militaristic nature of Nazi Germany, life at Napolas was dominated by military discipline, was highly competitive, even brutal. It was extremely hard to get in and nearly as hard to stay. Approximately one fifth of all cadets failed to meet required standards or were sent home because of injuries sustained in training accidents.

The National Socialist rhetoric was paramount and the prominent belief among the cadets was that of the “Endsieg” or final victory. The privileged students of the Napola schools were mobilized in the final months of the war, serving as a poorly equipped and minimally trained but highly motivated infantry. Armed with little more than blind fanaticism, they nonetheless offered fierce resistance in many battles in the last months of the war. Casualties among them were extremely high.

By 1941 there were 30 NPEAs with 6,000 pupils enrolled in all of Nazi Germany, just three were for girls. By the end of the war in 1945, 43 Napola schools were listed. One of them was located in Ploskovice in Sudetenland (Czech Republic). The students were housed in the Ploskovice Castle built around 1700 by Duchess Anna Maria Franziska of Saxe-Lauenburg (1672 – 1741).

The Girl From the Mountains

It was hot the day of Walter’s swimming meet. In the stands, Magda sat between Jana and Renata on the bleachers. Aleš sat on Renata’s other end. The Taubers were just behind them, Frau Tauber in a hat and a pair of sunglasses. As the swimmers walked out in a line to their starting places, Magda attempted not to stare at Walter’s triangular form. There was another teammate next to him, a boy with very light blond hair and wearing the same black one-piece swimsuit as Walter.

Six swimmers stepped onto the diving blocks when the judge blew the whistle. A second signal and the swimmers crouched into their positions. A pistol popped and six trim bodies launched into the pool. Magda’s heart skipped a beat.

“Look at him go!” Renata pointed to Walter in the third lane.

The swimmers were pulling apart, a “V”, like geese migrating in the fall, and Walter was leading them. They hit the wall with a somersault and Magda saw Walter’s long, lean shape launch off like a missile beneath the water. He rose with powerful strokes, still in the lead. Now the differences between the swimmers was pronounced. Walter’s teammate was the only one even close to keeping up with him.

Magda was cheering with the others. Below her, Eliška was standing with two other girls her age. She pointed excitedly at the pool and bounced on her toes as she applauded.

Walter’s head and arm suddenly shot out of the water and he spun around, wiping his face, eyes trained on the clock. The line judge’s whistle declared him the winner.

Renata clapped Magda’s back. “I had no idea how thrilling this was! Did you see him go!”

Aleš was still applauding, a broad smile on his face. “I’m just sorry his mother couldn’t see it!”

Jana leaned forward. “She sees him. I’m sure she does. She’d be so proud.”

Walter rose out of the pool, sleek and wet, grabbed the towel from his trainer and began drying himself off. The others came to shake his hand and congratulate him. Magda smiled at his show of sportsmanship but frowned as two SS officers extracted themselves from the other spectators. They strode over to where all the swimmers were still collecting themselves. Magda nudged Jana and Renata. They had also seen.

The officers shook hands with Walter, his teammate and the coach. The boys listened attentively, their towels pressed up against their chests as they were still catching their breaths. Their looks changed from polite curiosity to smiles, encouraged by the officers’ obvious enthusiasm. The two boys looked at one another, then eagerly at the officers. Magda imagined Walter saying thank you as he reached to shake each of their hands again.

The other swimmers threw longing and envious glances at the group.

Frau Tauber suddenly rose behind Magda. “What are those women doing?”

Renata also shot up. She was already pushing past Aleš before Magda could register the scene below.

The two girls Eliška had been playing with were being yanked away by what appeared to be their mothers. One of the women shouted at Eliška, and all Magda heard was, “dirty Jew!”

The other one jabbed her finger toward the exit. “Go on, get out of here!”

Frau Tauber and Renata reached the scene at the same time. Frau Tauber bent down to Eliška, then rose as both women angrily pointed to the exit again.

Magda’s heart fell. Dr. Tauber was making his way down now. She glanced at the swimmers. The two officers had walked back to the bleachers, and those two mothers joined them. Walter was watching the scene. When he tipped his head in Magda’s direction, he made some sort of face she could not interpret then he followed the rest of the swimmers to where their teams were gathered.

Frau Tauber and Dr. Tauber each took Eliška by the hand, and without another glance at the rest of them, walked out the gate.

Jana and Aleš also stood and Magda joined them. Quietly, for nobody had to explain what had happened, they left the meet. 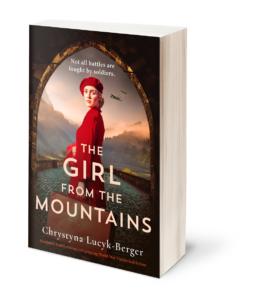 How Mussolini Got Blindsided